Get a new DTH connection in Sector 13, Chandigarh

Chandigarh is known to be the well-planned city of India and it has been digitalized years ago. This is because modernization was introduced in Chandigarh quite early. However, entertainment is important aspect of every city of India. Chandigarh is a place where people from different localities of India reside and getting a variety of channels on cable TV network would not be easy. However, DTH has helped users to choose their desired channels only and pay for them. Sector 13, formerly known as Manimajra is Major IT hub of city as most of the It companies have their offices located in Manimajra. However, users here would like to have an interrupted flow of entertainment and Buy New DTH Connection can help you in the same. 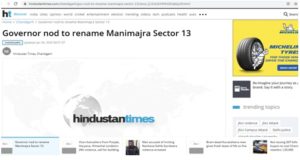 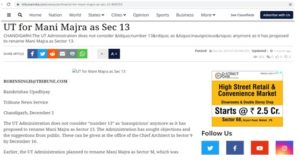 Why to choose Buy New DTH Connection in Chandigarh, Sector 13?

Well, the Administration of UT Chandigarh has proposed the offer to rename Manimajra as Sector 13 because it never existed in the master plan of Chandigarh. This is because the famous architect who designed Chandigarh believed that 13 is an unlucky number but according to the officials it is a superstition. Hence, administration does not consider bringing Sector 13 inauspicious in Chandigarh- “The City Beautiful”.

However, the final decision has not been announced yet and it would be announced after examining the suggestions and objections of residents. Some people believe that renaming Manimajra would be a great sign towards breaking stereotype while other believe that it would demean the history of place. However, the news of renaming Manimajra as Sector 13 was brought up by many famous new portals such as The Tribune, Hindustan Times and Times of India. Here is the screenshot of the news that has been breaking headlines:

Buy New DTH Connection is headquartered in Chandigarh itself and it services are provided all over India. However, you can get an uninterrupted flow of entertainment in your ideal place all over India with us. You can call us on 8437-005-009 anytime to enquire about DTH connection